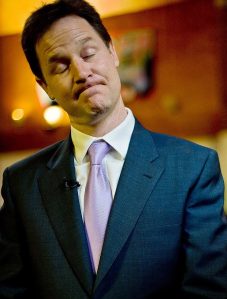 A fortnight ago, representatives from UK mosques and Muslim community organisations were invited to attend an “engagement” meeting with Nick Clegg, the Deputy Prime Minister and Leader of the Liberal Democrats (LibDems) at London Central Mosque.

From the invitation, it had sounded as though the event would be a focused opportunity for some honest and frank conversation about issues affecting the day to day lives of Muslims living in Britain – possibly even a chance for attendees to take the Deputy Prime Minister to task on certain matters.

The “engagement” meeting turned out to be a mutual back-slapping fest of LibDem campaigners and party members, with the vast majority of attendees left looking on as mere frustrated spectators. Between the sycophancy of certain attendees, and the LibDem panellists who were chuffed with their own box-ticking of “Muslim” issues (e.g Guantanamo, Gaza etc), the toadying was quite embarrassing to witness.

One Muslim LibDem party member, who spoke while the audience awaited Clegg’s arrival (Clegg was around two hours late to the event), explained that he had joined the LibDems because they ‘cared about humans and human dignity’! Oh, of course! It is not as if the members of other political parties would claim the same – no, it is clearly only the LibDems that put humans first (as opposed to putting aliens or animals first?).

Once he arrived, Clegg was strangely presented by the hosts with a generic (and non-specific) award as soon as he approached the panel and before he had even spoken! I never knew that simply turning up could merit an award! Before Clegg finally did stand to speak, one of the panel’s presenters described Clegg’s appearance at the mosque as an ‘historic moment’, and praised Clegg to the point that an Evangelical Christian’s description of Jesus would pale in comparison.

During his speech, Clegg spoke about his admiration for Muslims and their strong family values, particularly at a time when we were seeing the “atomisation” of British society (a euphemism, we can only presume, for “individualism”). However, his admiration for the traditional values of Muslims seemed to quickly fizzle out when challenged on the issue of same sex marriage. As it turned out, the event was orchestrated such that questioners from the audience were pre-selected, and answers to those questioners also seemed to have been prepared in advance.

One member of the audience, who must have been pre-vetted, seemed to bravely depart from the script and flagged a number of new children’s storybooks he was carrying, such as “Mum and Mum get Married“, which were designed to teach school children that same sex marriage is normal. This attendee asked Clegg why the Muslim community were not consulted regarding this new legislation, and expressed his concerns about the aggressive campaign to change the very definition of marriage that society is built upon, and that primary schools will be imposing on children the view that same-sex marriage was normal and moral (which would mean that the state is not neutral and is enforcing a particular moral standpoint on the issue).

Some members of the audience protested that Clegg hadn’t actually addressed the gentleman’s question, but Clegg, in true politician style, continued obfuscating. Perhaps the gentleman changed his question from the pre-vetted one, and we got to see Clegg answering a question he thought he would be asked, but wasn’t?

Another question was raised, this time from a child, asking how he could become politically active – to which there was much noises from some members of the audience expressing how adorable it was. Of course, the usual clichés were sounded in response – that he should go out and vote (said completely straight-faced, despite the fact that the child was obviously much too young to vote in the UK!). The inquiring mind would wonder if the political parties actually believed political involvement was impossible in the West if one didn’t vote. Of course they would want us to think that, for they only need you to vote – for them (and they’ll do whatever they like afterwards). Why would a prospective governing party want a population that could challenge their decisions, or hold them fully accountable for their promises after they got into power?

In all societies, most political work is not actually voting. In fact, political activity like demonstrating, lobbying, leafleting, writing letters, signing petitions, protesting and even advertising, have achieved far more than voting ever did, or could. Unfortunately these days, protests and demonstrations are increasingly heavily policed, and only permitted for short durations and limited areas (but only once permission is given by government). Of course, this is a simple truth; democracy is now all ‘cracy’, but no ‘demos’.

Many Muslims at the back of the hall agreed that the event was tacky, sycophantic and patronising – but perhaps it was beneficial to see that the world of politics in Western countries really was as fake and toadying as they had suspected.

At the end of the event, some people were permitted to have a special after-event dinner with Clegg. Many of the attendees believed that by fawning over Clegg, he would grant some political favour or attention to the Muslim community. What they didn’t realise was that this was merely a vote attracting event, hoping for more LibDem MPs to get successfully elected in areas with strong Muslim majorities. The shameless and gaudy self-promotion of the LibDem party members should have made the purpose of their visit obvious, but some attendees may not have noticed, being too preoccupied with reciprocating, in equal measure, their shameless adulation towards these ‘honoured’ guests visiting from their ivory towers.

« Upcoming event in London: ‘The Beauty Within’
Do Women Need Power? »