The Muslim “Feminist” (who isn’t really a “Feminist”) 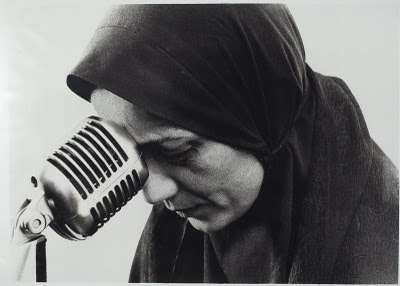 “Feminism” has been stalking Muslim women. It has been quietly was-wasa-whispering that it deeply and fully understands the liberation that Muslim women seek – that it understands Muslim women better than Muslim women do (and definitely better than their Creator does!). “Feminism” has been vowing, nay threatening, that it alone is the answer to injustices against women, and that to reject feminism would be to reject social justice, to reject our own obligation to justice, so let. it. in.  Just ignore, it asks, that in public, it has been cursing our veils, criminalising our values and even dictating where we should sit – just accede to female tears and let. it. in.  A few Muslim women, faces wet from recounted stories of afflicted women, have unchained their doors and invited this impassioned adjective into their homes, into their lives, into their “identities”, as a way of “honouring” or demonstrating their advocacy of women’s rights. They are calling themselves Muslim “Feminists”.

One such Muslim woman tries to explain why she has taken on the “Feminist” suffix, as follows (originally posted here):

“Salafi: A Salafi (Arabic: سلفي‎) is a Muslim who emphasises the Salaf (“predecessors” or “ancestors”), the earliest Muslims, as model examples of Islamic practice. (Wikipedia)

Salafi (Media Definition): Muslim men who wear short thawbs and have big beards, Muslim women who wear hijab/ abayah/ niqaab; Muslims who despise the West, have dreams of world domination and The Khilaafah (TM), and are determined to practice Islam openly. *Shudder*

Salafi (North America): A bunch of guys with short thawbs, long beards, and way too much time on their hands, which they spend writing PDFs declaring everyone else to be Off The Manhaj (TM).

Feminist: An advocate for social, political, legal, and economic rights for women equal to those of men. (Dictionary.com)

Feminist (Popular Opinion): Hairy, man-hating women determined to prove themselves superior to men and take over all male jobs.

Feminist (Muslim Popular Opinion): Hairy, man-hating women who are going to destroy the natural order of this world by claiming to be equal to men.

Muslim Feminist/ Feminism: A form of feminism concerned with the role of women in Islam. It aims for the full equality of all Muslims, regardless of gender, in public and private life. (Wikipedia)

Muslim Feminist (Muslim Popular Opinion): Man-hating, self-hating women who try to use Islam as an excuse to destroy the Muslim Ummah from within; those who attempt to destroy the natural order of this world by claiming to be equal to men, or at least slightly more equal than many Muslims prefer to believe. Alternatively, Muslim women who have been brainwashed by the West into thinking that the role of a wife and mother isn’t enough for her, and is now just a pitiable tool of the Decadent West (TM) who must be warned against, because there is absolutely no hope for her, especially when she starts trying to quote ayaat and ahadeeth to justify her clearly warped and corrupted views.

The Salafi Feminist: Someone who just likes to see everyone get their knickers in a knot when they see the words ‘Salafi’ and ‘feminist’ put together, and love to say things like, “in salafi-feminism you have combined two of the most disastrous movements in modern history!” (True story.)

Okay, so maybe I’m deliberately being a tease. It’s hard to resist, though, seeing as how everyone wants to shove me and my views into an annoyingly narrow box, because unless you fit into a pre-constructed box, you don’t count! Anyway. I am a niqaabi who hates those “Da’wah pictures” which say women are either pretty covered-up lollipops or trashed unwrapped candies being bombarded with flies. I am a happy wife and mother, and I loathe those people who try to tell me that I should only be happy in my role as a wife and mother. I believe in pursuing knowledge, Islamic and otherwise (and in fields other than gynecology or teaching kindergarten), and would really like to flip the bird at those twits still debating “women’s education in Islam.” I frown upon mingling between the sexes and pre-marital relationships, but I will never belittle another woman’s value and worth as a human being based upon her sexual history or rumours about her reputation. I rage against the injustices of Western governments, but I refuse to turn a blind eye to the tragedies that Muslims inflict upon each other. Drone strikes, illegal wars, and the occupation of Palestine are right up there with domestic violence, sexual abuse, and racism within Muslim communities. I believe that men and women both have control over their actions and desires, and that a woman looking at a male speaker is not going to send her into a frenzy of lust, or that any man is incapable of keeping it in his pants when he sees a woman whose body is not covered from head to toe in black. I respect the scholars of Islam and will defend them to anyone who tries badmouthing them, but that doesn’t mean I’ll stay silent when some of their words are harmful to the Muslim women of this Ummah. I believe that homosexuality is a great and terrible sin, but I also believe that shirk is worse. No one should allow their sins to stop them from reaching out to Allah, the Merciful, the Forgiving, the One True God. I uphold that modesty and chastity is for both men and women; that women should wear hijab, men should lower their gaze, and that both parties assist each other in making their societies purer in every way. I believe that “The believing men and believing women are allies of one another. They enjoin what is right and forbid what is wrong, and establish prayer and give zakah and obey Allah and His Messenger. Those – Allah will have mercy upon them. Indeed, Allah is Exalted in Might and Wise.” (Qur’an 9: 71)”

This piece was a choice example of a Muslim “Feminist” not really being a Feminist at all. Seeing as she hasn’t provided a sincere definition of a ‘salafi feminist’ (or maybe her definition was sincere, and it really does just mean the desire to be outrageous), I’m going to go with her vanilla definition:

“Feminist: An advocate for social, political, legal, and economic rights for women equal to those of men.“

[1] if you advocate that men and women should receive an equal inheritance, then you must also advocate that women do half the bread winning, too.

[2] if you advocate that men and women should physically protect each other equally, then you cannot object to a female ruler, and you’re also saying that men have an equal right to physical protection as women do, and so women must stand guard, go to war, etc in equal measure.

[3] if you “believe that men and women both have control over their actions and desires”, then you must also advocate that modesty by way of hijab and lowering gaze is not necessary for either party at all.

Muslims calling themselves “Feminist” to advocate women’s rights makes as much sense as Muslims going to an alcoholic bar to drink water.

What the views of this Muslim “Feminist” remind us is that very often young Muslim women mistakenly imagine that Feminism holds some monopoly over women’s rights and so, in order to demonstrate a commitment to women’s rights, they have to identify themselves as “Feminists”. Because this particular category of Muslim “Feminists” do not subscribe to the values of Feminists at all, but actually the values of Islam, would it not be more rational, and a more decisive call to justice, to just call themselves “Muslim”?

« Men and a Bowl Full of M&Ms
Upcoming Feminism Debate with Julie Bindel: “Islam or Feminism: which one can truly liberate women?” »