Public Debate: Is Islam the Cause or Solution to Extremism? 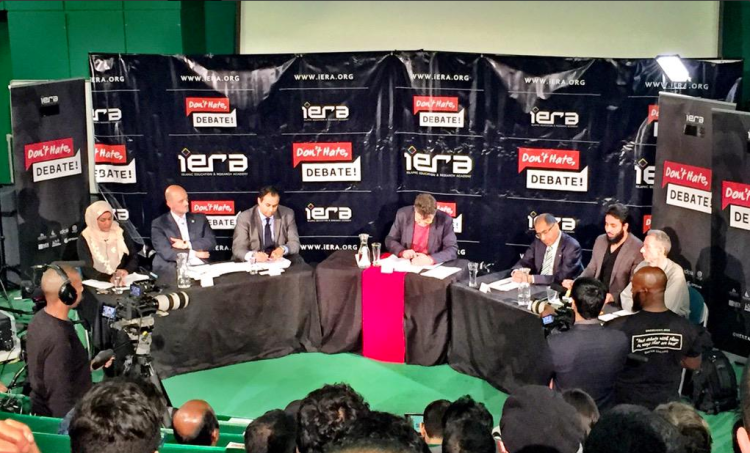 On Friday 16th Oct 2015, Zara Faris was invited by the Islamic Education and Research Academy (iERA) to speak at a cross-panel debate on the criminalisation of Islam and tackling extremism in London entitled, ‘The Big Question: Is Islam The Cause Or Solution To Extremism?’

The panel was chaired by Peter Oborne, the former Chief Political Commentator for The Telegraph and included:

All the speakers provided an interesting (and sometimes heated) debate. MDI’s Zara Faris performed admirably, by keeping the debate on the topic and exhorting the attendees to deal with the bigger picture, namely that people have blindly  accepted the word ‘extremism’ without questioning what right does the government or Political Liberalism have to call other worldviews ‘extreme’? Zara also demonstrated through use of extensive evidence that religion, and the interpretation of religion, had no connection to violence whatsoever. However, Zara pointed out that the top philosophers of Political Liberalism do justify terrorism done in the name of Liberalism in ’emergencies’. Zara argued that the government’s clampdown on ‘extremism’ is just a smokescreen to cover it’s clamp down on anyone who politically differs or dissents from Political Liberalism. Anyone who examines the history of political liberalism, will see that it has a well-defined history of intolerance to ideologies/religions it considers to be rivals.

« PUBLIC DEBATE: ISLAM OR FEMINISM: Which One Can Truly Liberate Women? Julie Bindel vs Zara Faris
What is the Real Ideology that Leads to Terrorism? [2min VIDEO] »