Did the Suffragettes Believe in Democracy?

Polling booths were propped open around the country again today; the perennial nagging began: “Women, use your vote! The suffragettes fought tooth and nail to win you this right!“

Given that women (and even men of a lower social standing) were excluded from the democratic system in the first place, what on earth made suffragettes think that the democratic system was a just system to participate in at all? It is like being ‘piggy in the middle’, and then demanding the right to be one of the wolves.

The very fighters for women’s right to vote were, ironically, the most cynical of democracy.

Their methods involved disrupting parliament, acts of arson, violence, property destruction, even bombings – all enacted in order to influence the government or intimidate the public to advance their cause. The illustrations below narrate events of the awful acts that actually took place at the hands of these militant feminists.

Historian Dr Christopher Bearman describes their actions as “carefully calculated, stage managed, cold-blooded crimes“, and even equates the suffragettes to modern-day terrorists, saying: “Terrorists do not perceive themselves as aggressors; they invariably claim to be acting defensively in response to wrongs done to them. The suffragettes are a case in point…“.

Not only are suffragettes responsible for weaving women into the fabric of a system that perpetuates injustice, but they used deplorable, non-peaceful methods to make this happen. They justified this by expressing their lack of confidence in the democratic system to deliver them their rights! Why they would fight for women to participate in a system not even they believed in themselves, is one of the great ironies of history.

So, why on earth are we participating in a system that justifies so much injustice, yet we then deplore the injustice it causes?

(Illustrations are from “Sally Heathcote: Suffragette” by May M Talbot, Kate Charlesworth, and Bryan Talbot.) 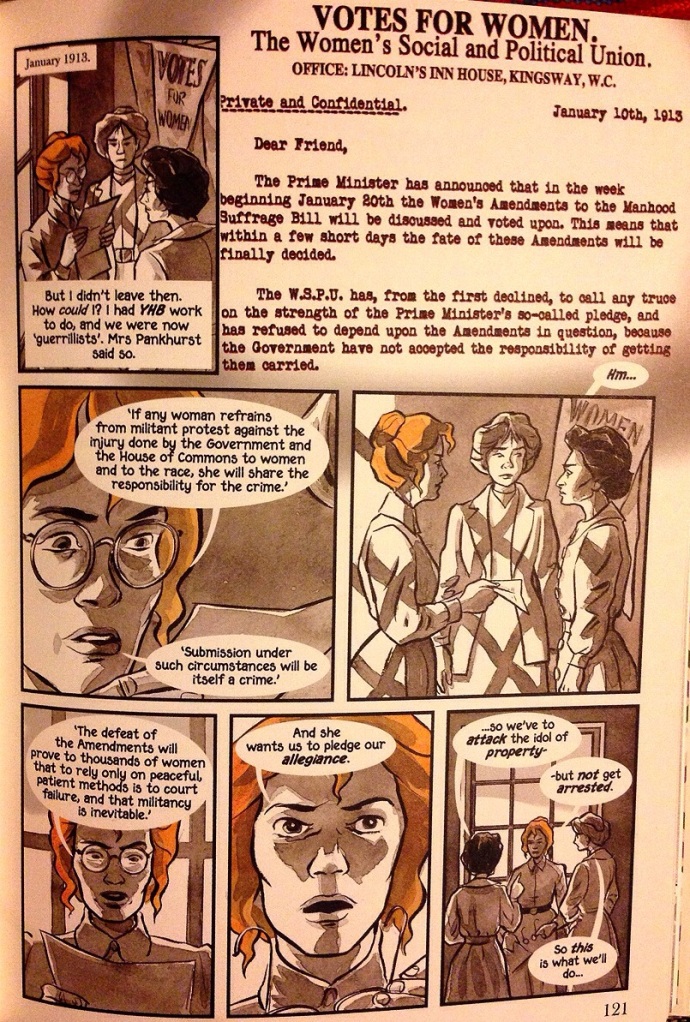 « A short reflection: On Muslims Being Absent from the Present
Brauchen Frauen Feminismus? [German Translation] »