DEBATE VIDEO: Is it wrong not to identify as feminist? 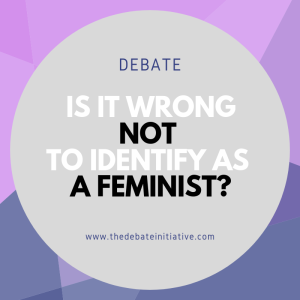 The full video of my debate with two feminist activists – a barrister and magazine editor who argued that everyone should identify as feminist – is now up!

The debate motion “Is it wrong not to identify as feminist?” was decided by audience voting before and after (where the winner is the side that manages to change the most minds). Alhamdulillah, as the opposition, we successfully defeated the motion by  gaining an extra 30% of the total audience over to our side.

Since it was a university, one might assume that the audience would be more inclined to left-wing views and therefore more likely to identify as feminist. However, whilst they seemed to subscribe to secular liberal values, most of the students did not identify as feminist. This echoes what studies have shown – that only 7% of women in the UK actually identify as feminists, even though majorities of men and women report belief in gender equality.

What is interesting to note is that most non-Muslims in the secular west have never really identified as feminists, begging the question: why are there certain Muslims who are itching to use and spread the “feminist” label? As a colleague of mine said, if you are going to insist on imitating the West, as least be up to date.

The only successful part of this imitation is that feminists in the Muslim world are having just as much difficulty persuading people to call themselves feminists as their counter-parts in the West.

Overall, it was a great debate with a lot of points made, not just by the panellists but the audience too.

You can now watch the full debate for yourself on YouTube (or right here!)

Those arguing it is wrong not to identify as feminist:
Emily Zinkin (Writer and Editor for the F-word blog)
Julian Norman (Human Rights and Immigration Barrister)

Those arguing it is morally ok not to identify as feminist:
Natasha Devon MBE (Writer and Activist)
Zara Faris (Writer and Speaker on Women in Islam)